How To Design Your Personal Operating System

In a previous post, I argued that for most of us, our personal OS is an unintentional amalgamation of habits born from the chaotic interplay of our our genetics, family culture, and life/work experiences, represented graphically by this venn diagram. 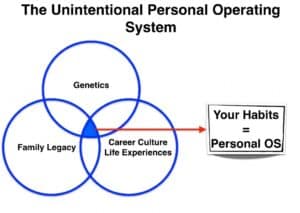 It’s as if you are squeezed out of the womb as a newborn onto the unmarked road of your life, and as the journey unfolds you pick up all sorts of hitchhikers – habits – that ultimately, like it or not, force you to destinations of their choosing. As Frank Ostaseski said in his book The Five Invitations, “the habits of our lives have a powerful momentum that propels us to the moment of our death.”

Nine years ago, I was in love with my personal OS. I had so much evidence of its value. My OS pulled me out of the trenches of my troubled youth and propelled me to enormous career success. But then I ‘suddenly’ found myself sitting on a couch in a psychologists office at Hazelden trying to figure out how the hell I became addicted to prescription narcotics.

At the beginning of treatment at Hazelden, I was, to put it in gentle terms, resistant to the program. I wasn’t about to let go of my precious personal OS and have their program rammed down my throat. My resistance was obvious to my fellow sufferers as I later learned that they had secretly voted me “least likely to succeed.”

During one couch session with my psychologist, she recommended that I read the book, The Power of Now, by Eckhart Tolle. I read it until I couldn’t. To me the book was a rambling repetitive mess that seemed to suggest sitting around and doing nothing. At a subsequent couch session I said to my psychologist, “so what am I supposed to do,  just sit here and stare at the f#$%ing wall all day?” Despite this, I was left with an inkling that there was something under this rock that merited the effort to lift it.

There is a lyric in the song Anthem by Leonard Cohen, the Canadian poet and musician:

“There is a crack, a crack in everything

That’s how the light gets in”

That inkling was the crack that let the light in. So I started to dabble in the habit of meditation. I studied. I read Jon Kabat-Zinn and Pema Chodron books, I watched Jon Kabat-Zinn and Pema Chodren videos. Everyday I sat on the Zafu cushion I got from Amazon. I tried to make my nose the center of my meditation universe but I kept getting pulled back to planet Maddaus and getting lost in thought. It seemed to help. It seemed as if I had a much greater awareness of my thoughts, emotions, and reactions. But I wanted to believe, so it was hard to tell, for sure.

But then Consciousness kicked open the crack in my door and all the light poured in.

Here is the kicker: that football sized Milky Way galaxy inside our head is made of matter. Just like everything else. But this little football sized hunk of matter gives rise to Consciousness.

The question of how matter creates Consciousness is as staggering a question as why there is something rather than nothing. Awe inspiring, no matter what origin story you believe.

When it hit me that Consciousness is metaphorically like the universe, an open, spacious place, without boundaries, my perspective on my mental life changed dramatically.

I finally really got it that everything, absolutely everything – emotions, thoughts, sounds, sights – all of it, are just appearances in consciousness. They are constructs generated by the neurologic galaxy in our heads that rise to the level of awareness in consciousness. Consciousness is the infinite universe, and all appearances in it are like shooting stars, comets, or black holes, coming and going, constantly changing. Impermanent.

This, with the help of Sam Harris, led me to another ah ha moment. The feeling that there is an “I” in our heads, that there is a person in there who is driving the car, is also just a construct generated by the neurologic galaxy that appears in Consciousness. It only feels like there is someone in there. This feeling is profoundly reinforced day-in and day-out by the near constant dialogue we have with ourselves, generating an obsession with our “I” that can lead to codependency or even fusion. In other words, we shouldn’t take our “I” too seriously.

Ok, back to the personal OS metaphor. A computer OS is made of two elements: a kernel and the user space. The user space is made up of all the apps. Think Word, Powerpoint, etc. The kernel is the the part that manages all the interactions between the apps and the hardware.

We can view our personal OS in the same way, where the kernel is Consciousness and the apps are our habits: 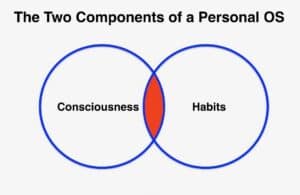 Arming ourselves with this paradigm shifts the power over who or what controls who we are from this from fate:

to an intentionally designed You: 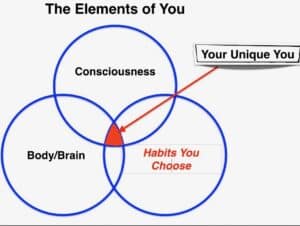 Being deliberate about redesigning or upgrading our personal OS with habits of our choosing is one of the greatest powers we have over the “momentum that pulls us to the moment of our death.”