This Could Be the Last Time

Given that I have a 65 year old body topped off with a full head of white hair, the thought “This Could Be the Last Time” has started to bubble up from my brainstem into my cortical awareness more often over the last few years, especially if I was doing something that I really enjoyed. It hasn’t been a source of morose morbidity. Just a momentary reflection that I don’t dwell on and that doesn’t in anyway put me in a funk. It’s just plain true, and I am ok with that reality (what choice do I have anyway?). Oddly enough, I noticed that the thought served to make me pay more attention and savor whatever I was doing.

The truth of “This Could Be the Last Time” was driven home for me last week with our dog Jacques, a French Bulldog. Jacques is 11 years old and he has a case of halitosis that can melt my nose hairs and a very warty nose. To be frank, Jacques is not an ideal representation of the French Bulldog breed. 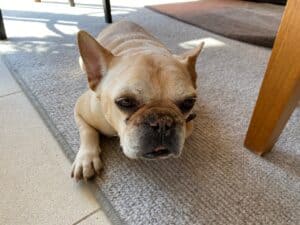 This was aptly demonstrated when my wife and I were outside one sunny day with Jacques and a friend of my wife’s pulled up in her car alongside the curb to say hi. The woman stuck her head out the window and looked down at Jacques and said “what is that?” Despite his genetic challenges, Jacques has been a tremendous gift for our family.

Three weeks ago Jacques started having grand mal seizures. Those are the big ones with loss of bladder control, purple tongue stuck out, and near suffocation. He had no other neurological signs outside of the seizures and otherwise appeared well. We started him on one medicine and got a reprieve for a week. Then last week he had 6 seizures in one day. We scheduled home euthanasia for the next day, a service I didn’t know existed before this.

That night I wrote to the vet and we decided to give another medication a shot (pun intended). So he got loaded up on phenobarbital again and for the next two days was wandering around the house like a drunk, but without anymore seizures. 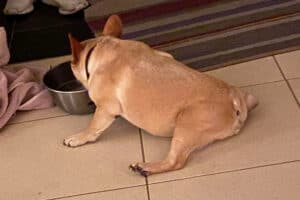 Once the loading dose wore off we got him on a maintenance dose and he has been seizure free for the last week. Each day we have had with Jacques we have openly talked about how it could be the last time. Each day with Jacques is a gift, made even more poignant by the current circumstances.

About two months ago, before the start of this whole mess we are all in, I was listening to Sam Harris in one of the Conversations on his Waking Up app with William B. Irvine, a professor of philosophy at Wright State University in Dayton Ohio. The topic of the conversation was The Art of Living.

Irvine took up the study of Stoicism about 15 years ago and became interested in it because, unlike other arenas of philosophical study, Stoicism offered concrete, actionable things one can do mentally that can make a real difference in one’s quality of life. He has written two highly reviewed and practical books on Stoicism: A Guide to the Good Life: The Ancient Art of Stoic Joy and The Stoic Challenge.

One of those mental moves is the This Might Be the Last Time thought, a mental habit that at first glance could be seen as unduly focused on death in a morbid sort of way. But in this context the intention for the This Might Be the Last Time move is for it to serve as a mental trigger that gets one to take aim at whatever it is that one is doing and really focus on the experience.

But the This Might Be the Last Time move does more than just bring focus. By realizing that it indeed could be The Last Time, it also serves as a mental push to get one to savor whatever that thing is, to take it in and relish it, and it can bring a sense of gratitude for getting another shot at doing that thing, one more time. Harris uses an example of getting a splinter in a finger. A splinter hurts and it is a hassle, but Harris notes – “it connects you to a reservoir of patience and a kind of affection for life, even the negative moments.”

With everything that is going on and with the increased time many of us have, it struck me that this is a good opportunity to cultivate this mental habit, to help us be more mentally and emotionally resilient right now and to help us continue to savor life’s small moments in the future, once these challenges are behind us.