A very close friend of mine has cancer, and it is almost sure to end his life in the very near future. He lives in another city but was here on a short visit. We went to lunch and had sushi together the day of his flight back home. After lunch, I dropped him off where he was staying. I stood in the foyer with him, the front door open to the warm and sunny Minnesota fall day, and I looked up at his face.

His skin was sallow, there were small patches of an imperfect shave from that morning, his normal erect strong posture was bent over by the gale force of his cancer and the treatment, and the scalp jutting out from the edges of his baseball cap looked the remains of an island devastated by a hurricane with only tiny patches of long grass-like strands of hair surviving.

And now it was time to say goodbye to each other.

As a surgeon, I have been in similar circumstances with patients with cancer who knew they were going to die. But this was different. He is one of my best friends, someone I have known for over 30 years, through all of our major ups and downs.

And now he is leaving, possibly for good.

There are no words to fill in the pain gaps that exist in a moment like this. It is as real as life gets, and to try to cover it up with bright psitticisms like “everything will be ok” only serves to push away the painful beauty of the moment. And it is beautiful, because we both know the score, because we both care about each other, and because it is honest.

I hugged him tightly, and as I stepped back, I asked him when the next scan would be to see if the tumor had grown.

He smiled and said, with a stunning calmness that reeks of real acceptance:

I looked into his calm, peaceful eyes, hugged him again, and left. As I drove away contemplating my friend’s acceptance, I was brought back to the book Four Thousand Weeks: Time Management for Mortals by Oliver Burkeman (a pound-the-table masterpiece). In chapter 7 – We Never Really Have Time – Mr. Burkeman covers some territory so relevant to that moment of saying goodbye to my friend.

Like the fact that, as the title suggests, we all only have about 4000 weeks to live (80 years) on average. And that when we say we have time, we are really saying we expect it, as time can be stripped away in an instant.

And most importantly, “the assumption that time is something we can possess or control is the unspoken premise of almost all our thinking about the future, our planning and goal-setting and worrying and it is a constant source of anxiety and agitation.”

“Partway through this particular talk,” recalls the writer Jim Dreaver, who was in attendance, “Krishnamurti suddenly paused, leaned forward, and said, almost conspiratorially, ‘Do you want to know what my secret is?’ Almost as though we were one body, we sat up … I could see people all around me lean forward, their ears straining, their mouths slowly opening in hushed anticipation.” Then Krishnamurti “said in a soft, almost shy voice, ‘You see, I don’t mind what happens.'” You see, I don’t mind what happens. That is what my friend was saying to me just before I left him. Not minding what happens is not the same as not caring, or not trying, or not being proactive as hell. But it does mean that no matter the outcome, I will not be attached, because being attached to outcomes leads to suffering, and although pain is inevitable, suffering is optional.

I recommend memorizing the phrase “I don’t mind what happens” and make this a habit of your life, for when we don’t get what we want, and for when we get what we don’t want. It calms the choppy waters of our minds into a smooth and calm and accepting mental ocean where one can muster up the reserves to respond to, and not react, to life.

There is indeed, only now, and it is liberating as hell to really accept that. 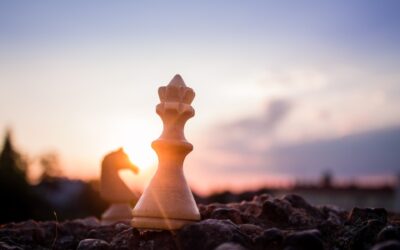 The Chess Moves of the Resilience Game

One day my wife Lea Ann said to me “nothing ever stops you.” She clearly did not mean it as a compliment, but I took it as one of the...