One Thing To Do, Sometimes, When Things Are Tough

Last week my daughter Maya and I drove to NYC to move her out of her apartment. She moved to Manhattan over a year ago with the excitement and anxiousness that any young person would have after graduation from college and finally striking out on their own.

She lived in the east village, a funky, edgy part of Manhattan, and loved it. Many of her close college friends lived nearby, and by the time the COVID tsunami hit the island, Manhattan had come to feel like home.

In early March I stopped to visit her on my way back from a Heroic Public Speaking session in New Jersey on the day before the tsunami hit. That night as we walked to dinner through the busy streets, the invisible force field of tension was palpable. We all, me, Maya, and all the New Yorkers, pretended everything was ok, but we all knew it wasn’t.

As a surgeon, when the antennae of my clinical intuition picked up significant concern about a patient after surgery, my automatic response was to assume the worst and then make sure the worst didn’t happen.

My gut told me that the worst was going to happen in NYC and I pushed Maya hard that afternoon to come home with me to Minneapolis. She refused but several days later, when the reality became so real, she packed a suitcase to come home for week or two.

The week or two is now 12 and, with NYC looking like a shell of its glorious past for the immediate future, Maya and her two roommates decided to throw in the towel and move out.

So we rented a U-haul van and drove to Manhattan to pick up her belongings. As we approached Manhattan and the entrance to the tunnel, it felt as if we were visiting a good friend whom we had not seen for a long time, who was now in the hospital, and very ill. We were anxious about how our friend might look.

Despite the false optimism of the sun shine, there was no denying the reality; the streets of NYC, on a weekday, had the low key energy of being in a public park on a warm summer day. People with face masks just seemed to be walking and meandering around. The normally intense, forward pressing weekday energy and vibrancy, so ubiquitous in Manhattan, was gone. It felt sad, lonely, and lost, as if the soul of NYC was gone.

It was hard to see our friend so ill.

In an effort to minimize the risk of exposure to COVID to ourselves and hence to our family back home in Minneapolis, we executed on the move out with military precision. We pulled up to the curb outside the barbecue joint downstairs from her apartment, donned our masks, and climbed up the two flights of stairs, U-Haul boxes, packing tape, and Hefty garbage bags in tow.

Maya’s other 2 friends had already moved out, so we threw all of her belongings in to the boxes and bags with the same urgency and pace of the Navy Seals throwing papers and computers into boxes after killing Osama bin Laden. Scoop and run.

As we drove through the tunnel on our way out of Manhattan, sadness was in the air of our van. Maya’s first real home on her own, the great adventure of NYC, was gone, as it was for many of her friends.

Then, en route, we get the news about the death of George Floyd in Minneapolis. As I watched the Youtube video of his death at the knee of the Minneapolis cop, my heart sank and my stomach sickened. It was as bad as it looked. He was killed, in cold blood. I realized that his murder would crack open the volcano of misery of racism and wealth inequality that plagues our country today. I knew there would be trouble ahead for Minneapolis, my home for over 60 years, and for our country, with no one on the political front who could bring us together.

When we pulled up to our driveway late Thursday night there were peaceful protests just a half a block down the street from us at the home of Hennepin County Attorney Mike Freeman who, unbeknownst to me until now, is a neighbor. The violence began that night.

On Saturday, there were online posts detailing the threat of looting and burning of local businesses in our neighborhood just 2 blocks from our home, because of their proximity to the Hennepin County Attorney. Businesses and their employees we have known for years – an Italian Deli, two Italian restaurants, a Mexican restaurant, a coffee shop, a florist, a pizza joint, a running shoe store, a second hand clothes shop, and of all things (in Minneapolis), a scuba shop – were at risk.

Suddenly I felt the same fear that I felt the day before the COVID tsunami hit NYC. I and other neighbors wondered if we should leave for the night and stay somewhere else, perhaps the same fear so many people of color must feel day after day in their worlds? We decided to stay, and it turned out to be the right move as the city was locked down after 8 PM by the National Guard.

Next up in the concatenation of misery, our precious French Bulldog Jacques.

He began having seizures again that night. In a previous post I wrote about his travails when we thought we were going to lose him. But with some phenobarbital he turned the corner and was back in our lives.

Not so this time. By Sunday he was having more seizures, was incontinent, and he went blind. He started constantly wandering around the house, agitated, as if he were drunk, running into things. We knew it was time to put him to sleep, but the soonest we could do it was the next day.

Jacques and I had a special relationship. Whenever I was sitting in the bathroom (yes, on the toilet) I would call out his name “Jacques, Jacques…” again and again, softly and gently, and he always wandered down the hallway, gingerly, to the open door (which drives my wife and daughters nuts) and then peek around the doorframe at me, waiting for the game to begin.

I would lean forward and stare intently at him, as if I were trying to hypnotize him. His big bug eyes bulged even further until he snapped with anticipatory glee after which he would fall down on his front paws and start to bark like crazy at me. Once I backed off with the stare down he would nonchalantly turn around, plop down on his belly, and drag himself down the hall with his hind legs trailing behind. 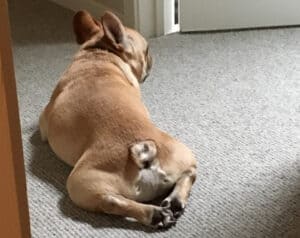 Now, on this Sunday, I found myself sitting outside in the front yard with my wife, with Jacques curled up in my lap, quiet and peaceful for a short time. As I caressed his sweet little body my heart swelled with sadness, since I knew this would be the last time.

I experienced the same dissonance I felt on the day in NYC as COVID was washing up on the shore. On the one hand, it was a beautiful sunny day and the birds and insects and trees and all of the natural world was carrying on as if nothing had changed.

On the other hand, Maya and so many other peoples lives all over the world had been upended, George Floyd had been murdered, the country was engulfed in rage and chaos, Trump was threatening to send in military police, and our precious Jacques was dying. I was overwhelmed with a crushing sadness for the misery brought on by the COVID pandemic, for George Floyd and his family, for the people of color who have suffered so long, and for our country. And for Jacques.

I said to myself, in my head, “it could be a lot worse. You have a lot to be grateful for, just think of others and their suffering.” Which is all true. But that did not erase the pain I was feeling.

As a surgeon, and a genetic problem solver, I was at a loss.

I said to my wife, “you know, the only thing I can think of doing, is to not do anything that might make things worse.”

After I said those words outloud, the urges pushing at the inside of my mind to do something to relieve the fear, sadness, stress, and anxiety went away. It was still miserable, but at least I accepted it, fully. It was remarkably freeing. It is the space from which clearer decisions can be made about what to do, if anything.

The next morning he went to sleep at the vets, peacefully. Afterwards, I sat there with him wrapped up in a towel, on his back, his head and paws sticking out of the towel, below me. He was peaceful, and with tears streaming down my face and in between sobs, I thanked him for all the joy he gave us for so many years.