What a state of affairs – the impending cold winter, covid, computer hell, loneliness, unemployment – so many negative possibilities for us to focus our attention on. As the saying goes, what you focus on grows. Especially in that massive galaxy of 100 billion nerve cells inside all of our skulls.

So, in anticipation of our day of Thanksgiving tomorrow, I thought it might be of some value to focus on a bit of monkey business. The phrase monkey business carries a positive vibe, since it is often associated with kids goofing around and having fun and parents yelling from the kitchen “stop all that monkey business!”

In the world of monkeys, monkey business is serious business, especially when monkeys pick bugs off each other. I suspect that most of you have seen pictures like the one above of monkeys sitting around picking bugs out of each other’s fur.

Note how calm and peaceful they look, and dare I say, connected to each other? Monkeys really dig picking bugs off each other, since they spend 20% of their entire day doing this mutual grooming, way, way more than is necessary to just get the bugs off. How come?

They do it because monkey it relieves monkey stress and it makes monkeys feel more connected to each other. Their mutual grooming is the engine of monkey social harmony – it keeps tensions down and it keeps the monkey group humming along peacefully.

When monkeys groom each other it causes the release of brain endorphins, which are the brains naturally occurring narcotics. That is why they look so relaxed and connected. Brain endorphins serve two critical functions in both monkeys and humans: the are the molecular brakes of our cortisol stress response and they are the molecular glue of our connection with each other.

These days the chronic stress of covid, politics, and all the uncertainty can feel like riding a crowded New York subway full of strangers – 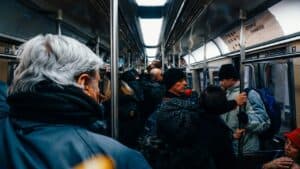 you just try and endure the ride until you get to your exit. The way to exit that stress, on demand, despite the circumstances, is with the intentional practice of gratitude.

The intentional practice of gratitude is the human equivalent of monkey mutual grooming – it is thought to release brain endorphins, which is why gratitude has so many powerful effects like decreased levels of inflammatory markers in the blood, better sleep, and less depression.

Notice the use of the word intentional. There are 3 ways to practice gratitude intentionally:

First, by taking time to reflect and appreciate the mere fact of being alive and the chance to take part in this crazy mystery of living and consciousness. It is a good way to pull yourself out of the quicksand of the daily grind.

Second is to spend a few minutes a day writing down a few things that you are grateful for in a paper or digital journal. The key here is to not let the practice turn into another task to check off the daily to-do-list. Use your prefrontal cortex to reimagine those things from the day before or whenever to get the brain endorphin juices flowing and then write them down. I like to do this in the morning to prime my mental pump for the day.

Third is to make the effort to thank people for whatever contribution they have made to your existence, small or large, and mean it. From my training and career as a surgeon, I had a very strong tendency to see the world through more of a transactional lens – expecting people to do their job or role, to do it well, and that I shouldn’t have to thank them all the time.

I was just plain wrong. I remember how awkward it felt when I first started saying thank you to people in my life for small things that I used to take for granted. But it started to work over time and became easier and I started to really mean it, and it felt good and like it was the right thing to do.

The intentional practice of gratitude by thanking someone or taking the time to appreciate them also has significant collateral effects. In my marriage it has fostered a greater acceptance of each other and it has generated more patience and kindness between us. Plus, it generates brain endorphins in the gratitude recipient, making them feel good and more likely to return the favor.

I will never forget a patient of mine who taught me the power of gratitude. He had kidney cancer that had spread to his lungs and to the inside of his airways. The tumors blocked off his ability to get air into his lungs, and in the past I had been able to use a scope to clear the tumors from his airways with success.

Unfortunately he was readmitted one night and was struggling like hell to breathe past the recurrent blockage, and both he and I knew that there was nothing more that I could do to clear the blockage. Despite this dreadful knowledge, when I walked into the room he smiled through his oxygen mask, told me how nice it was to see me, and then thanked me and everyone on my team for all of the great care he received.

He said all of this while he was wheezing and struggling for each breath and knowing that his death was imminent. After, in the hallway I looked at the residents and nurses and said what we were all thinking – “I hope I can be like him when my time comes.” His gratitude helped him, and it helped us, immensely. Studies of gratitude in palliative care are confirming my experience.

So, like my patient, there are very painful realities that cannot and should not be ignored like surging covid cases and deaths, political struggles, gyms and restaurants being shut down, and more isolation and loneliness over the winter months.

It helps immensely to turn to gratitude as a positive force during these days, despite how we may feel, to keep our mental ship pointed in the right direction, no matter what.