The 4 Keys to Winning the Habit Race

“The habits of our lives have a powerful momentum that propels us toward the moment of our death. The obvious question arises: What habits do we want to create.” The Five Invitations by Frank Ostaseski.

In previous blog posts I likened individual habits as being similar to software programs that are part of our personal operating system (OS). Most of us come preloaded with habits borne of our genetic tendencies, family legacy, and life exposures. Some may be useful, while others may be causing us problems and even misery. Or there may be new ones you want to add to your personal OS, but the effort to upload a new habit seems expensive and overwhelming. Just like software for a computer, what’s needed are the proper instructions to either delete, upgrade, or install new habits.

I have found the best two resources for instructions on habits are The Power of Habit by Charles Duhigg and Atomic Habits by James Clear. Both are outstanding deep dives into the massive importance and power of habits and they provide foundational knowledge about the elements of habits and how to delete, upgrade, or add new ones.

To delete, upgrade, or load a new habit from your personal OS you must first understand the habit loop. The classic habit loop is driven by three things: a cue, a routine (behavior), and a reward, terms suitable for scientists studying mice. Instead, I like to think of the habit loop as a racetrack. The cue is the trigger or gun that fires the start of the race, the behavior (mental or physical) is the running of the race, and the reward is winning the trophy. A personal example to highlight the details.

A habit racetrack I used to run on was ice cream. I loved ice cream, ever since I was in grade school, and I have eaten it regularly but sporadically all my life. In my early 50’s I started going to Dairy Queen some nights after I finished the dishes. My kids and wife loved the idea at first, and what started out as an occasional summer night treat slowly evolved into a near nightly habit. The trigger was time – finishing the dishes after dinner – the behavior was going to Dairy Queen, and the trophy was that beautiful cone (medium chocolate without the chocolate coating) wrapped in my fingers and that first lick of cold smooth creamy chocolate ice cream. 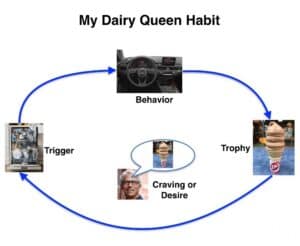 The folks that study mice highlight another critical aspect of our habit racetracks. If you win the habit race enough times, your desire to win and get that trophy, again and again, builds,  until you start to crave getting the trophy, again and again. Cravings are the fuel that keeps the habit engine running. No craving, no habit. It is as if you are Michael Phelps visualizing each race and the end, standing on the platform, gold medal in hand. In my case a chocolate ice cream cone.

Now here is where the habit racetrack gets interesting.

The trigger or cue is, on its own, is meaningless. It is, as Clear notes, our “thoughts and emotions” that imbue the trigger with meaning that turns a meaningless outside stimulus into a meaningful personal trigger. Think about me having just eaten and finished the dishes. In and of itself, meaningless. Why did it become so meaningful to me? Often we must peel back the layers of the onion to figure out exactly why a trigger has come to mean so much. In my case I initially thought it was just the taste of the ice cream. But I remember many times as I took my first lick that I really didn’t even want the ice cream that night. When I peeled back the layers of my meaning onion it turns out that the ice cream was just the thing that started the habit. On my own I don’t think it would have developed into a nightly trip. The Dairy Queen habit became a habit because I desired (craved) the fun and connection I felt with all of us piling into the car and going together to get a treat; in other in words what I desired was time and connection with my family, a rare commodity in our hectic lives back then. 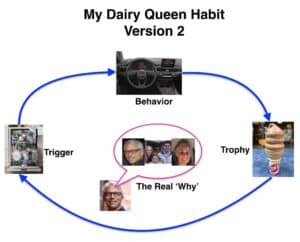 Awareness of these 4 key habit ingredients allows us to fiddle with them to alter or make our own habit recipes – ie it can allow us to delete old habits, alter current ones, or add new ones to our personal OS. For already deeply embedded habits there may not be a lot we can do about triggers as they tend to be things that are external sources of stimulation that are likely to always be present (unless I stop eating dinner and doing the dishes). But we still have the power to alter the behavior (mental or physical) or the trophy. For new habits we can work with all 4 elements of the race.